This past weekend, I couldn’t make it to the Saturday games so I monitored the game progress on Game Changer.  Many teams use Game Changer to score the games, both to allow fans like me to “watch” the game remotely and also to store team statistics.

After stepping away from my phone for a few moments, when I checked again, my screen showed that one of the players had moved to the second base on “defensive indifference”. 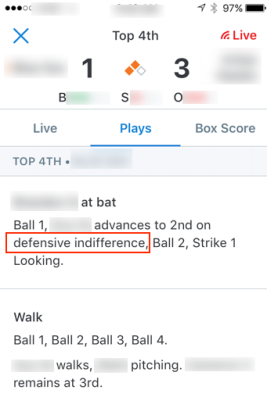 And that made me laugh out loud. My first thought, embarrassingly enough, was the trailer for the upcoming Emoji movie, featuring the story of Meh.

Once the games were over and we sat down to dinner, I checked with Coach Dad, #12, and #28, and this term was a bit of a mystery. We came up with our own definitions, all of which turned out to be wrong.

Defensive indifference is a term used by the official scorekeeper to indicate a situation where a runner advances a base when a pitch is delivered and the defensive team makes no attempt to stop that movement.  This base movement is not recorded as a stolen base.

Common reasons that a defensive team may not try to stop a runner moving from first base to second include:

The declaration of defensive indifference or stolen base is at the discretion of the official scorekeeper.   If you’d like the official scoring guidance from MLB, start reading at rule 9.07 in the Official Rules.